Part 1 and part 2 of this blog post series about Clojure’s persistent vectors should give you a good understanding of how the persistent vector works in general. However, there are many different ways of decreasing the constant factors. Perhaps the easiest one to grasp is the tail, which we will have a look at in this blog post.

The Rationale for Tails

Recall that this is the visualisation of the operation (conj [1 2 3 4] 5), without any tail implemented: If there’s space in the rightmost leaf, just copy the path down to the leaf node, copy the leaf, and insert the last element into the copy.

How would this differ with a tail? Let’s have a look:

For the conj-operation, we end up checking whether there’s space in the tail. Since it is – in this case – we copy the tail and insert the new element into it. Note that this is constant time, not effectively constant time. So every time we conj onto a vector with space in its tail, we do a constant time operation.

So this seems like a very attractive addition. How do we implement it?

Before we look at how we implement the actual operations, we need to have a look at a very easy concept: The tail offset of a vector. We need it to be able to understand how some of the vector operations changes. 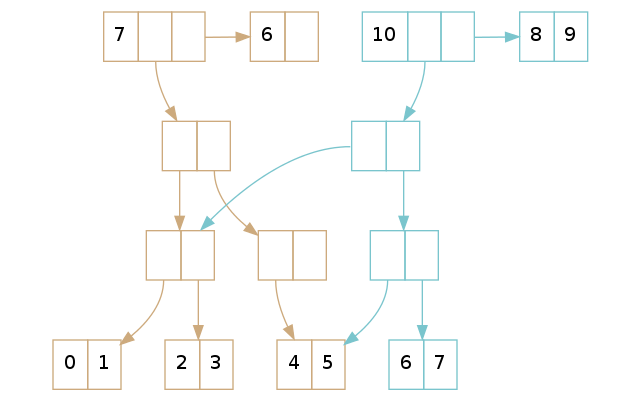 And here’s where we need to use the tail offset. In pseudocode, the lookup would look something like this:

An update is, as the lookup implementation, very similar to the original update implementation. The only difference happens when you want to update a value which resides inside the tail. We have yet again two cases: One where you update something in the tree, and something when you update the tail.

This would result in the following tree: 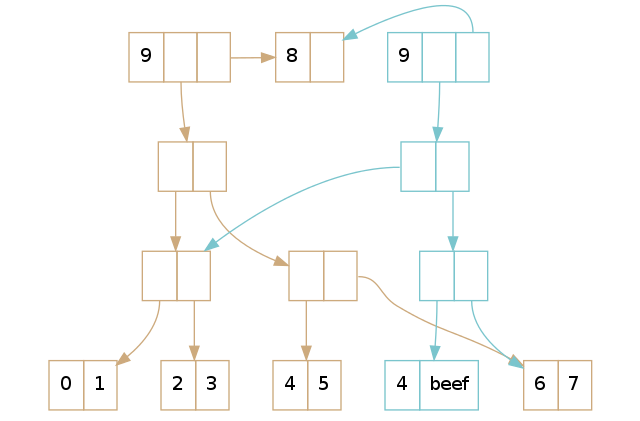 Just as in the explanation in part 1, we perform path copying and replace the element in the leaf. However, notice that they share the tail: After all, it hasn’t changed, so why bother copying it?

The second case is when we have to modify an element within the tail itself. Let’s reuse the previous example, but replace the element at index 8 instead of index 5: 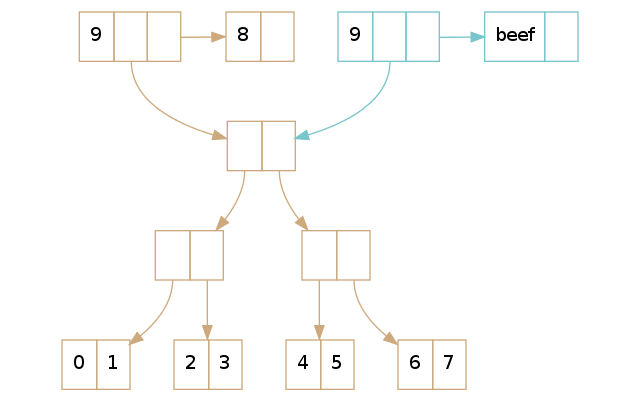 Lookup and update are easy, but how would we go forward with insertion and deletion? Well, it turns out that it’s not that difficult either. For insertion, we yet again have two cases. However, they are slightly different this time around:

The first case is – of course – easy: We just copy the tail and insert the new element at the end. The first figure in this blog post shows exactly how that works. But what do we do if there’s not enough space in the tail?

The idea is very similar to the insertion described in part 1, but with a minor modification: Instead of inserting a single value, we insert a leaf node. Recall that the tail is just a leaf node, which is directly pointed at from the root of the vector. 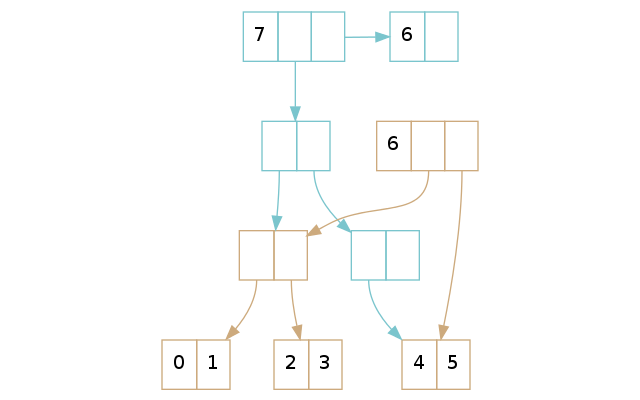 In effect, there’s not much more to insertion than this: It’s not difficult to grasp the understanding of it. However, an actual implementation needs to be a bit careful with indices when inserting the leaf node. Luckily, an off-by-one error is the hardest thing you’ll face if you’re implementing this.

It turns out that there are at least two reasons for keeping the tail nonempty in all cases1: The obvious one is that you now can guarantee that a peek is actual constant time. A more subtle one is that a random lookup will be, on average, faster: If it takes less time to look up a value in the tail than in the tree, then it is better to have a full tail than an empty one!

So, we end up – as you probably guessed – with two different cases we have to handle:

As I just mentioned, there won’t be any vector without elements in its tail (with the exception of the empty vector). Assuming that there is at least one element in the tail is thus perfectly fine.

If we have more than one element in the tail, we just copy the tail, remove the last element, and return the new vector. The example above shows us that only the tail differs, which is what we would expect.

Keep in mind that if we pop on the same vector twice, we will create two tails, even though their content will be equivalent:

If we have a single element in the tail, we have to “promote” the rightmost leaf node in the tree as the new tail. We also have to remove it from the tree itself. Those steps are similar to looking up and popping single elements in a vector without a tail, except that you look up and pop leaf nodes instead.

The most complex example is when you have to delete empty nodes and kill the root, as further described in part 1. However, as long as you follow the rules explained there, and consider the leaf nodes to be the “elements”, you should be fine. Below is such an example, where the rightmost leaf node is “promoted” to a root node. 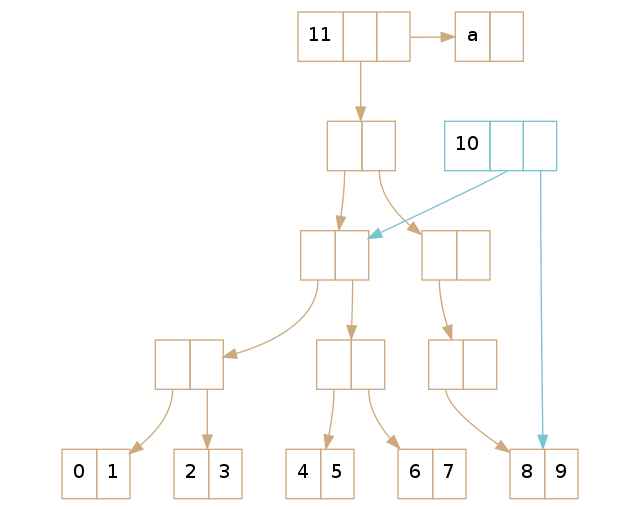 The next part of this series explains transients: Why we want them and how they work. Finally, the last part of this blog post series contains a performance comparison of the ArrayList versus the persistent vector.